Here’s one of the Rank Makers Trainings that many leaders in Rank Makers wanted to share with their team.

In this training I share exactly what to do if you are recruiting but aren’t getting any duplication on your team.

So, July of 2009, I had failed in a bunch of different network marketing companies and it wasn’t their fault. It was my fault. It was a combination of things, actually. Some was upline fault, but really, at the end of the day, it’s still my fault. Even when it’s your upline’s fault, it’s your fault.

So, I failed in a bunch of different companies for different reasons. I was in foreclosure, dead broke, a million dollars in debt, being chased by bill collectors. I’d gone through a divorce. I’d gone through engagement, disengagement. My girlfriend at the time was paying my utility bills (now my beautiful wife, Jessica).

So there’s all the time prior to that that was filled with:

And then there’s just the decision that I’m going to make it happen.

Now, they may creep up from time to time, but never, never on a more than four-minute basis did I sit there and, “Oh, woe is me. Why?” None of that stuff. It just didn’t exist any longer.

Where Am I Going?

The point of decision, doubt was eradicated, destroyed, and then we moved forward with the sole focus of, “Where am I going?”

It’s not the existing circumstances, because there’s always someone in worse shape than you that has gone on and created success anyway.

So, it’s never the circumstances, ever.

There are people that are sitting in the lap of luxury, they have everything going for them, not successful. They still find something to complain about.

And they are people that have been destroyed by financial, health devastation, family loss, illness, crime, all kinds of stuff, that went on to create success anyway.

It’s not obstacles. It’s how you think and what you’re focused on.

So, you’re either focused on where you’re going or you’re not and you won’t get there. Very important.

How I Got My Team Duplicating

With this newfound decision, did everything just go smoothly? Well, let me tell you, I really wish.

Now, in that fifth month, I just so happened to recruit a guy who then went out in the next 90 days and killed it. He personally recruited 250 people in the next 90 days, built a team of thousands and thousands and thousands of people, and I went on to become the number one incomer of that company. But if you would have evaluated me at five months, you would say, “This guy’s a good recruiter, sucks as a leader. Sucks.”

Now, again, I didn’t know all the duplication and all the culture stuff that we teach in the Branding & Duplication Playbook. I didn’t know all of that stuff. And some people, they recruit two people and they’re like, “Oh, my God. They’re not doing anything. What the hell? What’s going on here? Geez. Geez Louise.”

When I brought them in I said, “Hey, listen. Let me know if you need anything. I’m here for you, but I’m bringing more people in.”

Now, something pretty remarkable happened in that fifth month. So. I recruit super dude, and he goes on to crush it, and something funny happened. Some of the people that I had originally recruited who hadn’t done a damn thing, all of the sudden, they woke up. All of the sudden, they woke up, and they got to work. So they witnessed somebody other than me recruiting, and that fired them up. I had at least one, maybe two people, that I had recruited in the original five months that hadn’t done a damn thing go on to become six-figure-a-year earners.

Don’t Beat Yourself Up

People look for what’s wrong with themselves like there’s a damn reward for it, like there’s nowhere on the tracker of, “How much did you beat yourself up, huh? Only two hours this week? Well, then no reward for you.”

There’s no reward for beating yourself up. In fact, it’s pretty selfish. It’s going to sting.

Yet, you’re sitting there saying, “What’s wrong with me? I’m not a good leader. I’m not doing enough.”

You got to have a little bit of patience.

So, if you’ve been recruiting for five months and you have zero duplication, in fact, it’s negative, congratulations. You may go on to be the number one incomer of your company if you just stay focused on where you’re going.

But if you beat yourself up, then you will never, ever, ever, ever get there, and you’ll never impact the amount of people you could have. You got to stop it.

So, what do you do if you recruit someone and they’re not doing anything, they disappear off the radar?

Send them gratitude, not grief.

But, stop climbing up in the lifeguard chair and saying, “All right, you go recruit. Why aren’t you recruiting?” YOU go recruit.

Will You Stay Focused?

Will you stay focused on where you’re going? That’s the only question. You either will or you won’t.

You’ll either be a broken body on the side of the road, or you’ll be focused on where you’re going.

I was oblivious that no one was doing anything. I didn’t sit there and refresh my back office. “What are they doing, man? I sure hope they recruit.” Instead, I was too busy talking to people. I was too busy reaching out. And, I was too busy doing the things that I prayed upon a star that they would do.

Stop waiting for them to do a damn thing.

And also, stop making them feel bad if they don’t have the level of desire that you have. Love them for being there.

If you believe in your product, your service, your opportunity, why would what others are doing in your organization dictate you going and impacting other human beings?

Let me tell you. If you’re only doing this for money, you’re going to have a tough time.

If you think like that versus, “They’re not doing anything. Loser. Wrong person. I got to prospect better people because you suck.” It’s one of the problems with this damn profession is that we think that just because someone doesn’t take off, they’re a loser or they’re not good enough.

I mean if our mission is just to make people feel good. NOT, “They got to be a six-figure-earner or they’re a loser.”

Welcome them, love them, high-five them, selfie, hug. Do all that stuff.

They may not go on to be six-figure-earners, but that shouldn’t be a requirement for you to be happy or for them to be happy.

There are people in your organization that aren’t doing a damn thing, and they’re okay with it. You be okay with it. Inspire them with your action. Bring in more people. Show them how it’s done.

Again, this video was pulled from our Rank Makers Private Group. If you like this training, you may consider getting on the Rank Makers Waitlist.

Why People Will Join You If You Are Brand New

If you enjoyed this post about What To Do If You Are Recruiting But Not Getting Any Duplication In Your MLM Downline, retweet and comment please 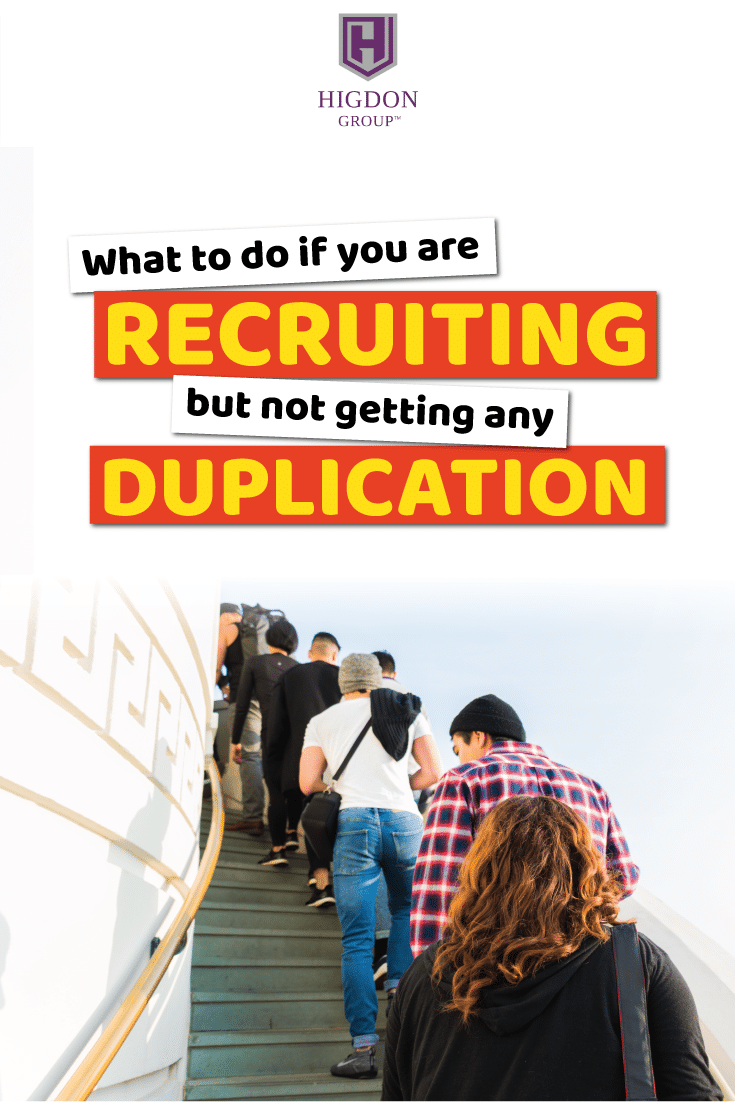